“In November 1857, three companies of the 34th Native Infantry stationed at Chittagong mutinied and after burning their lines, breaking open the jail and plundering treasury, marched in the direction of Comila; then they turned off into jungles of Hill Tippera, whence they subsequently emerged in the south-east of the Sylhet district. Their intention was to push on, through the south of Cachar, into Manipur. As soon as Mr. Allen head of their movements, he determined to intercept them. Under his order, Major Byng, the commandant of the Sylhet Light Infantry ( now the 8th Gurkha Rifles), set out with about 160 men and reached Pertabgarh, some eighty miles distant, in the short space of thirty six hours. Then, hearing that the rebels were expected shortly to pass through Latu, twenty eight miles away, he made a night march and arrived there early next morning. The rebels, numbering about two hundred, came up soon afterwards. They tried by taunts and solicitations to prevent the Hindustanis, who formed half the detachment, but only answer they  received was steady fire, which put them to fight with a loss of twenty six killed. Major Byng was also killed His successor in the command did not think it advisable to follow them into jungle, but a few days later, after entering the Cachar district, they were attacked by another detachment of the Sylhet Light Infantry under Lieutenant Ross, and were again put to fight.”  (From History of Assam, E.A. Gait, pp. 378-79) 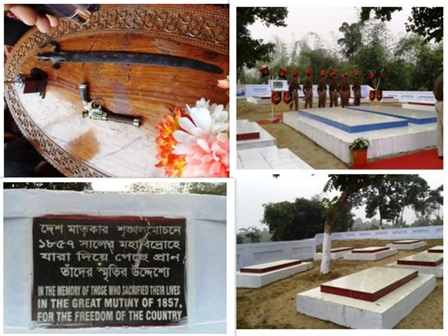 “In Chittagong, the govt. had three hundred soldiers. When the news of the mutiny reached ther, these three hundred soldiers rebelled. They looted Rs. 278267 from the collector’s office, took three elephants, freed prisoners and through Tripura marched onto Sylhet. There, they, through intimidation, procured food from Souchh Ali Khan, the old father of Maulavi Ahmed Khan, the Zaminder of Lungla. At a later time, it was with much difficulty, that the Zaminder was able to prove his innocence. When the news reached Major Byng of the Sylhet Light Infantry, he promptly marched his infantry towards Pratabgarh. Reaching there, they learnt that the sepoys had left for Latu. Major Byng and his soldiers immediately started for Latu, leaving behind half cooked rice.The British soldiers met the rebels near Latu bazar. The rebels took shelter on the malgar (treasury)  hillock  on the bank of the river and started firing on the British soldiers. The soldiers were stationed on the bank bellow. The first round took Major Byng who instantly died.Soon another five soldiers were killed and one was seriously injured. SubedarAjodhya Singh showed great skill and won the battle. The incident is known as the battle of Latu. The rebels left behind them 26 of their comrades who were dead and hid themselves in the jungle.” [Translated from Bengali from Srihatter Itibritta: Achyut Charan Tatwanidhi . This English version is taken from  Mutiny Period  in Cachar: Edited by Dr. Sujit Choudhury]. 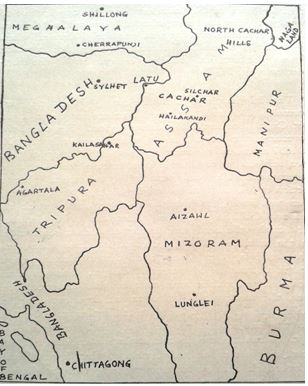