The most amazing thing about Son Beel is that it becomes a farm land for rice cultivation during winter till March and then the land fills with water and becomes a lake. The less depth of the lake makes it overflow during rainy season and the water meets Kushiara River through Kakra River and flows to Bangladesh. The lake gives a picturesque landscape with hills on both east and west sides. The inlet and outlets of Son Beel is River Shingla that originates in Manipur. Son Beel is famous for its fishery and it is one of the main producers of fish for the entire district in southern Assam. Son Beel is best visited during rainy season that is March onwards till the beginning of winters. Till then the lake is full of water and offers a view that is hard to find elsewhere. 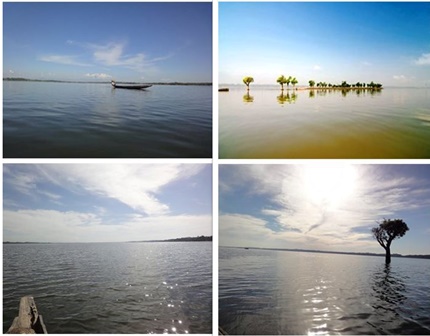 POPULAR THINGS TO DO& SEE IN AND AROUND:-

The mesmerizing seasonal wetland is house to many Hizol trees (Barringtonia Acutangula) which offers an amazing view around the lake. The trees stand tall in both dry and wet seasons and the half merged Hizol trees are a point of attraction. Apart from that, sunrise and sunset near the lake gives you a colorful view with sun rays reflecting in different ways. The night sky is full of stars with lake shining in the dark.

Son Beel can be easily reached from Karimganj which is just 43 km away with a driving time of 51 mins. You will find various transports like government buses, private taxis, etc to reach the beautiful and seasonal wetland Son Beel.