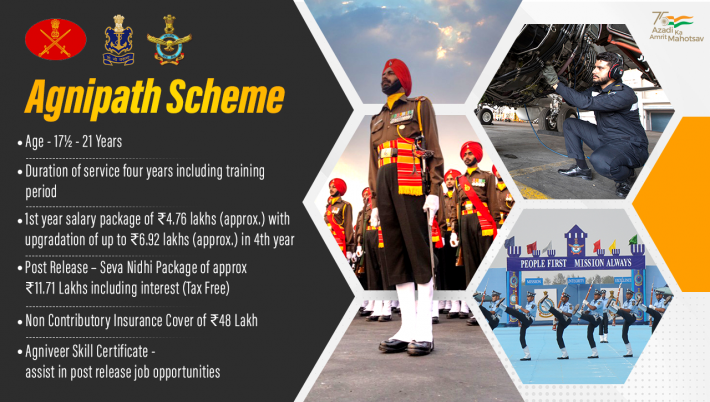 Agnipath Scheme (also spelled Agneepath Scheme) is a tour of duty scheme introduced by the Government of India on 14 June 2022, for recruitment of soldiers below the rank of commissioned officers into the three services of the armed forces. All recruits will be hired only for a four year period. Personnel recruited under this system are to be called Agniveers, which will be a new military rank.

The Agnipath scheme was approved by the Indian Government in June 2022 to be implemented from September 2022. The announcement was done on June 14, 2022. The scheme is for both male and female aspirants of age group 17.5 to 21 years. In the midst of widespread protests against the scheme, the Central Government raised the upper limit from 21 to 23, but only for recruitment in the year 2022.[14][15] The recruitment through this scheme is to be twice a year for the Indian Army, the Indian Navy and the Indian Air Force. The posts available are below the officer cadre. The Agnipath Scheme is the only route to serve in the military.

The recruits named Agniveers serve for a tenure of four years that include training for six months followed by 3.5 years deployment. After retirement from the service, they will have the opportunity to apply to continue in the armed forces. Not more than 25 percent of the total strength of the retiring batch will be selected for the permanent cadre. Personnel who retire after 4 years of service will not be eligible for pension, but will receive a lump sum amount of approximately ₹11.71 lakh at the end of tenure. The Indian government plans to recruit 45,000 to 50,000 new personnel every year through this scheme. In September 2022, 46,000 youngsters are planned to be recruited through the scheme.